It’s time for the last day of my Walt Disney World trip report! Is it weird that I’m sad all over again?? As always, get caught up on any part you missed by

Day 5- Epcot I woke up on this morning feeling happy that my cold seemed to have subsided. I decided I should take at least one dose of cold pills with me, so I took the dose out of the box and set it next to my phone while we got dressed. This was such a mistake… I should have put it in my park bag immediately because I left the cold pills on the table in our room when we headed out to the bus stop. We got right on a bus and got to Epcot about 15 minutes before rope drop. After we got through the ticket turnstiles, Zadrin took our tickets and headed off to get us FastPasses for Soarin’ while Zethan and I strolled casually towards Test Track.

This was the first time we would be riding the new Test Track version that opened in December 2012. I had already decided to not look for ride videos of the new version so that I wouldn’t ruin it for myself. (I love to watch ride videos when I need a Disney fix!) By the time Zadrin got back with our FPs, the wait time for Test Track was 25 minutes. I can say that I immediately missed the old Test Track from the moment we entered the queue inside the building. I didn’t completely dislike it, but I was just all, “Oh…” once the ride started. I don’t care about doing the pre-ride customizing your car thing, and the ride itself just isn’t as entertaining as it was before this redo. My boys liked the pre-ride part and really liked the section after the ride where you can drive or race your car that you built around in a video game like style… I honestly was bored with that part and found myself people watching and inching toward the exit while they took turns doing this part.

We managed to stay at Test Track long enough for it to be time to use our Soarin’ FastPass. It had only been about an hour from when Zadrin got them, but the boys played and then looked at cars long enough at the Test Track pavilion that the time flew by! Zethan and Zadrin both wanted to ride Test Track again, but I had no interest. Since we were eligible to get another FastPass now, they grabbed FPs for themselves before we walked over to The Land pavilion for our ride on Soarin’.

Timing was on our side when we got to Soarin’ cuz when we reached the end of the FP line, the Cast Member asked for any parties of 3 and apparently we were the only party of 3 in line! We bypassed the rest of the people in the FP line and got right on the ride. It was sometime during this ride that I started to get cold. And shivery. And Achy. And colder. I suddenly remembered that I forgot to pick up the cold pills from the table on our way out. Just.Great.

I love Soarin’!! It’s amazing! One of my Must Do favorites! Anyway, after we got done on Soarin’ I warned the boys that I was starting to feel bad and told them I wanted to sit down for a few minutes before we did anything else. I actually started to feel a little better while we sat near the ride exit, so I asked the boys if they wanted to get in line for Living with the Land. I still love that ride, but both of the boys told me they didn’t really want to ride it and that they’d rather go on The Seas with Nemo and Friends or Journey into Imagination. Ok then… We headed off to ride Nemo. We had plenty of time to do stuff until they could use their Test Track FastPasses so I figured we’d do both rides then do Spaceship Earth. Unfortunately, the short walk to the Nemo ride just made all of my feelings of blahness come back full force and I couldn’t wait sit down in the ride vehicle. By the time the ride was over, I was on the verge of death. Ok, not really, but that’s just how bad I felt.

If I could have been thinking clearly, I would have asked at the gift shop area for some ibuprofen or cold pills, or asked where the First Aid station was. But instead, I followed my boys around the aquarium area for a few minutes before I told them we needed to go back to the room after they used their FastPasses. Luckily they were fine with that. I don’t think they cared about doing anything at World Showcase and as long as they got to ride Test Track again, they were ok. We skipped Journey into Imagination and got on Spaceship Earth. All I remember about that ride (which is my favorite at Epcot!) is that I felt better when I was sitting down. As soon as we got done, I told the boys I was going to find somewhere to sit down while they looked around the area after exiting Spaceship Earth. They just wanted to get something to eat instead.

We got something to eat at Electric Umbrella. I didn’t even feel like eating and I was freezing by now. The wind picked up outside and I knew I wasn’t going to make it much longer without laying down. The boys ate and then went for their 2nd Test Track ride. I ended up sitting at the table at Electric Umbrella for a while and then I had to break down and buy a jacket at Mouse Gears because I was freezing!! I have to admit, I’m hard headed and really didn’t want to spend almost $60 on a hoodie jacket, but I felt THAT BAD that I was like. “Whatever! Let me just find one that fits me and it would be nice if it was pink!” So, $55.95 later… I was totally kicking myself for not bringing a jacket for myself from home!

Here’s the hoodie that I vow to wear the heck out of until I think I’ve made it worth the money I spent on it: 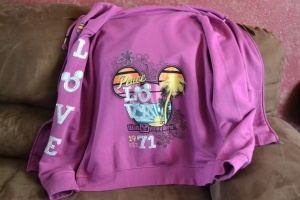 It’s not very thick, but I mostly like it because of the letter O on the sleeve which is a Mickey Head! Oh, and because it’s a shade of pink! 🙂

Once the boys had their fill of some more Test Track, they found me sitting on a bench waiting for them near Mouse Gears and we headed to the bus stop to go back to our room. I took a cold pill and fell asleep for several hours. The boys did a good job of entertaining themselves while I slept. I felt bad that I missed meeting up with one of my Disney Facebook group friends because I was sick, but Lori is a sweetheart and she understood! My friend Deb met me at the Pop Century gift shop to visit with me one last time while I shopped for souvenirs for my nieces, nephew and some friends. I ordered a pizza to be delivered to our room for dinner so that I could just rest more and start packing for our return road trip back home. I hated that I didn’t get some things done because I got sick, but as a true Disney World fanatic, I knew I’d be going back to my Happy Place and I’d just have to put those missed things on the To Do list for the next trip!

Early the next morning, my parents came to pick us up, we went to get my dog, Ziggy, from the Best Friends Pet Care kennel on Disney World property, and we headed back to Texas. It was still a Magical vacation, and I can’t wait to go back!

I hope you enjoyed my trip report! On my next trip, I’m totally gonna try to vlog that bad boy and maybe it’ll be more entertaining that way! Ok, well I’ve got ride videos to watch, and other people’s trip vlogs and reports to find!  See Ya Real Soon!