Day 3- Part 2 Animal Kingdom Ok, so on our way to head back to Expedition Everest to wait for it to open, we walked past a ride I vowed a couple of years ago to never ride: Primeval Whirl. For anyone who gets motion sickness like I do, it might also be referred to as Primeval Hurl. I usually only have issues on rides if there’s a spinning component involved. For this reason, I’ve only been on the Tea Cups one time and that was because my nieces and nephew went that year and they wanted me to ride with them really badly! I literally held on to the spin disc to keep the cup from spinning. By the way, it still spins very slowly even if you hold the spinner thingy.

Anywho, Primeval Whirl is like a little mouse trap coaster but the ride car spins at certain intervals. As we walked past it, I glanced over and noticed that there was only like 4 people waiting in line. I told the boys to stop for a second, I stared at the ride thinking “I haven’t eaten yet, I can suck it up and ride this once.” I asked the boys if they wanted to try it, and they said yes. The rain had slowed just a bit but it was still at a pretty good sprinkle. I made sure our Can’t Get Wet or You’re Screwed dinosaur was still well wrapped in his bags and we settled in the Primeval Whirl ride car (and I did the Sign of The Cross). I had been looking at where the spins occur and planned to try spotting during the spins to see if I could keep myself from getting dizzy/nauseous. We got up to where the car waits to begin the wild ride, and then we were going!

The entire time I was talking myself up. “You will not puke, you will not puke, you will not puke!” My spotting attempts seemed to work and I didn’t get dizzy! And by the end of the ride, all three of us were laughing and smiling like crazy! Before we were even out of the ride car completely, Zethan asked if we could ride again. Zadrin agreed that a second ride was in order, and since there was still less than 10 people in line, we rode again. It took a little longer the second time because the car ahead of us got stuck, so we had to wait for maintenance to come over and reset the car and as a precaution they moved us all over the the B track. The second ride was still awesome! I’m glad I decided to ride Primeval Whirl! 🙂

This little side ride worked out almost perfectly! By the time we got to Expedition Everest, it was STILL not open so at least we weren’t just sitting around waiting the entire time. Some people with FastPasses were giving up on the ride by now. People were giving their FastPasses to others who were standing around waiting. Two guys standing near us turned around and asked if we’d like their FPs. I thanked them and happily accepted them since the return time to get a FastPass was now almost 2 hours away. I already knew Zethan wasn’t going to want to ride so we only needed 2 FPs anyway. Less than 5 minutes after we were given the FPs, the ride finally opened!

Immediately, a ton of people got in the FastPass line and the Standby line was super short. My not-so-evil planned hatched instantly! Zadrin was trying to get in the FP line, but I told him we were gonna get in the standby line then use the FP for a second ride! Duh! I had Zethan go through the line with us because I knew he could exit the line and go to the gift shop right before me and Zadrin got on the coaster. We pretty much walked straight on the ride from the standby line. Here’s the ride photo: 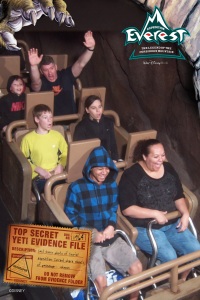 Then it was time to go get in the FastPass line! I checked on Zethan in the gift shop and then we went to get in line. The FP line was shorter than standby now. We timed it perfectly! We only waited about 5 minutes the second time. I’m glad we were in the front row the first time because this is how our second ride photo turned out on Everest that day: 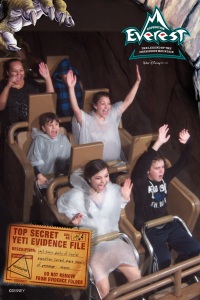 I was quite content with our time at Animal Kingdom, and since it was still raining, we decided to head back to the room for a bit. I briefly thought about going to another park first but the boys wanted to take a nap before we headed to Downtown Disney to check out the new Splitsville bowling lanes. I gave in and we had some Pop Century Food Court fare for an early lunch then watched TV and napped until it was time to go to Downtown Disney.

After a cozy (and much needed) nap, I contacted my friend Deb to coordinate a time for us to meet her at Splitsville. Since the lanes recently opened, I wasn’t sure how long the wait would be and I was hoping to get in before the higher evening rate kicked in. If the wait was too long we could walk around and check out some of the shops and get something to eat. Luckily it had stopped raining. We hopped on a bus and headed to Downtown Disney. It turned out to be an hour and a half wait for a lane, but that worked out well because Deb was still making her way to meet us. I got us checked in  and then me and the boys looked around Splitsville a bit then sat to wait. This was another time that the games the boys brought came in handy!

Once Deb arrived, we asked to be seated at a table so that we could order something to eat. Even here we opted for a pizza and burgers. The food was pretty good and our waiter (whose name I don’t remember) was awesome! Not long after we finished eating, our pager buzzed to let us know a lane was ready for us! We got our shoes and were escorted to our lane which was on the second level. I hadn’t bowled in years, but we had a great time! With four people, we were given an hour and a half to bowl. I didn’t do that well in any of the games we completed, but I enjoyed hanging out with Deb!

Here’s our scores after the first game, and the second picture is me and Deb from earlier in the week when we met at Epcot for the Micky Dolenz concert. 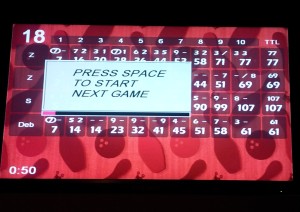 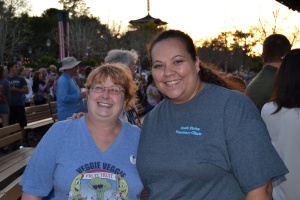 Before we went our separate ways for the evening, Deb and I were asked to take a survey about our Splitsville experience. I don’t know why I enjoy being asked to do surveys when I’m at Disney, but I do! After saying bye to Deb, me and the boys walked around Downtown Disney for a bit and did some shopping. I wanted to do Characters in Flight again but it was closed for the day due to wind and weather conditions. It was time to head back to our room for a relaxing time at the pool. We didn’t stay too long at the pool since it was still a little cool from having rained much of the day, but it was so nice to watch my kids having fun and enjoying the Magic! We spent the rest of the night watching Disney Channel shows and just relaxing in our room!

The next day was going to be the most challenging one: Magic Kingdom! There was a lot I wanted to get done and I was determined to go full Commando Touring at Magic Kingdom. This would prove to be too much for me…