Annnnnddd, I’m back! I really need to stop waiting so long in between posts because I start to forget details of my trip. And no, I didn’t make any notes. Bad me….

Anywho, if you missed the first two installments of my trip/race report, you can find
Part 1 HERE
Part 2 HERE

Ok, so on Saturday morning, Shari and I woke up bright and early so that we could make it to the Magic Kingdom at rope drop (park opening). We made a stop by the front desk to check again for the package that my friend Deb had left for us. It was supposed to have been delivered to our room the night before but it never arrived. A Cast Member located the bag for us and once we got it we made our way to the bus stop for Magic Kingdom. Deb’s gift bag was loaded with yummy snacks and some Disney’s Hollywood Studios 25th Anniversary commemorative items! Deb is awesome!

It was raining once again so I made sure to take my umbrella. Turns out Shari isn’t a fan of people like me carrying umbrellas in the parks…hee hee. But while we stood waiting for the park to open, I started getting tired of holding the umbrella up. On my last trip, it didn’t rain enough for me to have to hold the umbrella for a long time and I didn’t really think about that when I opted to take my umbrella and leave all of my rain ponchos at home. It didn’t take long for me to realize that it was going to be raining all day and I knew I wasn’t gonna want to tote the stupid umbrella around all day. So, despite the fact that I had more than one poncho at home (and I really didn’t want to add to that collection), I went ahead and got both of us Disney Parks rain ponchos. It was raining too much for them to do the opening ceremony that includes characters, the Walt Disney World Railroad and a Family of the Day, so I took some photos while we waited to get into Magic Kingdom. 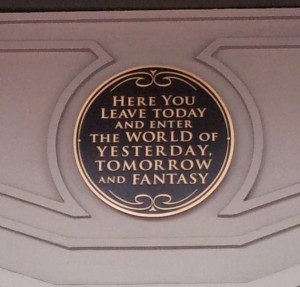 As the time drew near for Magic Kingdom to open, Shari and I began discussing making a change to what we were going to ride or do first. Honestly, I don’t even remember what we originally were gonna do first, but since we were pretty much in the beginning of the line for rope drop, we made a last minute decision to head to the new Princess Fairytale Hall to meet Elsa and Anna from Frozen! It’s  been a few trips since I have stood in line to meet any characters, and since I know that my boys are not EVER gonna want to meet Anna and Elsa (it was torture to them when I made them go with me to meet Cinderella, Belle, Aurora and Snow White) I figured this was probably the only time that I’ll meet them. So off we went with the mad crowd of people hoping to get in line without waiting 600 minutes.

Keep in mind that I’m a rope drop gal. I usually get to the Disney Parks before rope drop or very shortly after, but even when I’ve been at Magic Kingdom early and near the beginning of the pack, we’ve never really went with the masses trying to get to whatever popular rides. So once we began getting led in to the park and towards Princess Fairytale Hall, I was reminded of why I plan and avoid the crazy rush of people…

And here’s the video I posted to my Facebook timeline that morning:

No one was trying to run (from what I saw) but there were some cranky people vying for position after we were stopped at yet another rope right before the Cast Members opened Fantasyland and led the crowd to where the line began for Elsa and Anna. It’s crazy that we were nearly first in line back at the Magic Kingdom entrance but by the time we got to the queue, there were probably more than 150 people ahead of us and was already a 300 minute wait posted! I’ve decided that they automatically have the wait time listed high so that people anticipate waiting…

So this is where things got kind of cray cray for a while. There were people who had sent that ONE member of their party to get in line for Elsa and Anna only to figure out that the Cast Members were tightly(ish) enforcing the rule that your entire party had to be together in line upon entering said line. There would be none of that one person holding a spot for a group of 10! This worked for the most part, and we heard some choice words from the people who were told they could not summon the rest of their party past hundreds of others to get in line with them.

About 5-10 minutes into our wait, Shari and I discussed how we aren’t big on waiting in lines and this long 30 minutes we’d already been waiting was torture. But then we look at the time and realized it had been less than 10 minutes since we got into the line. Impatient much?? YES!! We ended up waiting a total of about an hour and 20 minutes to meet Elsa and Anna (and Aurora, but who cared about her at this moment…right?). It’s been a while since I waited over an hour for a ride at Disney World, and I don’t plan on doing that again any time soon…

I actually took several other pictures with my video camera while we waited but I moved a couple of weeks ago and I can’t figure out where I put that camera. Whomp whomp…

I enjoyed meeting these characters! They were awesome! But now it was time to move on to the next thing….and as soon as I recall what that was, I’ll post about it!