Before I begin the final part of Day 2, let me take a moment to tell you that I’m really wishing I had been able to fly to Orlando this trip so that I would have had at least my 7 days at WDW. I still had a magical and wonderful time with my 4 1/2 days at the parks, but it just seemed so rushed and I didn’t get to do some of the things I wanted because there just wasn’t enough time. Ok, mini vent over….on with Part 3!

Day 2- Part 3  After we left Hollywood Studios, we went back to our room at Pop Century and relaxed before we went to the Computer Pool. This is the boys’ favorite pool at Pop. It’s never been very crowded at all at the Computer Pool. The Hippy Dippy Pool is cool but it’s the big pool at Pop and most people like going there but my boys like when there’s less people in the pool. We’ve never actually gone to the Bowling Pin Pool, but I let the guys decide and they said, “Computer!” I actually didn’t even swim this time. I sat at a table with an umbrella, propped my feet up and just enjoyed the day. I even found myself opting to keep my phone out of my hands and just take in the atmosphere. It was really nice to just be there looking at all of the details surrounding me and watching my kids have fun in the pool. It was a little chilly, and since I didn’t even bring a jacket at all, I had to use the beach towels we brought with us to keep warm. Remember this whole no jacket nonsense, it’ll haunt me later in the week! 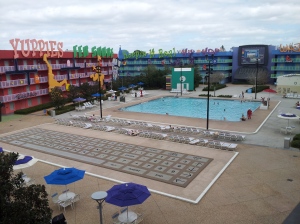 After hanging out at the pool, we went back to our room and while the boys showered and changed clothes, I went to the Pop Century food court and got us all something to eat. I’m pretty sure it was burger, pizza, chicken nuggets…so exciting… While we ate in our room, I remembered that it was getting dark around 7:30-ish which made me think of one thing: riding Expedition Everest (EE) at night! I’ve never even stayed at Animal Kingdom until it closed (since there’s no fireworks show there), and depending on the day and time of year, it can close as early as 6:00. So sometimes it’s not even possible to be there when it’s legit nighttime, and so many people have told me that riding Expedition Everest at night is awesome! On this night, AK didn’t close until 8:00!

I’d originally thought about going back to Epcot to watch Illuminations, but I suddenly decided that I wanted to go ride EE when it was dark outside, then go back to Hollywood Studios to watch Fantasmic! since it had a second show time at 10:00. So once we finished eating, we headed to the bus stop to make our way to Animal Kingdom! It wasn’t dark when we arrived at AK, which was at about 7:00. I was hoping that the Stand By line wasn’t crazy long. I checked the wait time on the app on my phone and guess what? EE was CLOSED!!! It actually comes up on the Disney app as “Temporarily Unavailable” but on the Touring Plans app it was reported closed, which usually means it’s broken down somehow. I decided we’d go to the ride anyway and maybe it would be running again by the time we got there. No such luck. The Cast Members standing outside of the entrance to the ride were giving the standard, generic “We’re having technical difficulties and we’re not sure when it will be fixed” statement to everyone, so I looked at the Disney app again to see what had little to no wait time.

Dinosaur only had a 10 minute wait and it was the closest attraction to Expedition Everest so we made our way to Dinoland USA to get in line. Zethan used to love this ride, but he said he was kind of scared of the Carnotaurus in the ride but he wanted to ride it anyway. The 10 minute wait was really just 5 minutes, so we were outta there in no time! Here’s our ride photo (there was no wait for me to add it to my Attractions+ card). Note Zethan looking less than thrilled sitting next to me. 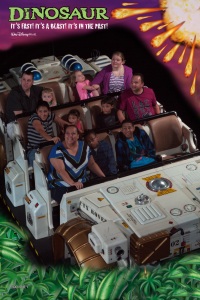 By now, it’s still only about 7:30 and I was kind of bummed that it still wasn’t dark outside. I checked my wait time apps again and Expedition Everest was STILL closed! Grrrr! We walked back to the ride, mostly because I was holding onto the hope that it was gonna be up and running before 8:00. On the way, Zethan let me know that he didn’t even want to ride EE. Whaaaaa???? This was one of his fave coasters only 2 years ago. But nope, he said he didn’t want to ride this year. I was getting tired of this not wanting to ride stuff thing he was doing, but I’m not gonna make him ride if he doesn’t want to, so once we got to Everest we scouted a safe place for him to wait, if the ride even opened back up. It was super boring while we waited to see if EE was gonna be running again, but my prayers were answered and about 10 minutes until 8:00 the CMs announced the ride was back up! Most everyone else had given up so the line was short and Zadrin and I got on the coaster in no time!

By the way, my ride photos never get any better….I’ve come to terms with the fact that I’m just gonna look crazy in every one! Side note, I brought a jacket for both boys, and Zadrin wore his jacket every day, all day… 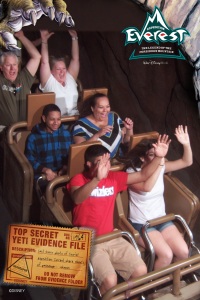 I really did like how it looked at the top of Everest at night. It was finally dark by the time the ride reopened and as the three of us left Animal Kingdom, I was so happy we got to see some of this park at night! It was beautiful! Since we had so much time until Fantasmic! we made another stop back at our room, and then went back to Disney’s Hollywood Studios. They were already seating people for the show so we walked in and found a seat. I really think Fantasmic! has become my new favorite nighttime show!

After the show, which still makes me tear up, we grabbed a snack (Mickey Premium bars and a Mickey ice cream sandwich for me!) and headed back to our room. We had a fun filled, productive day but now it was time to get some sleep to prepare for Day 3!