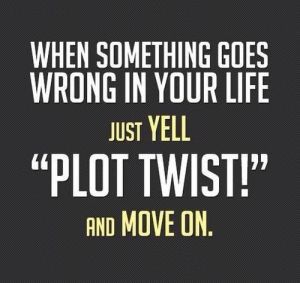 Ok, so about 2 weeks ago I ended up with a hamstring injury after a run. It was about 4 days before I could even walk without pain so I didn’t even try to run for a week. Then, my first run after that was this past Monday and I had to stop after 3.5 miles because my knee gave out. I’ve had knee issues since high school so I’m used to my knee randomly and unexpectedly giving out, but as I’ve been losing weight it’s happened less frequently. The fact that I was running when my knee gave out seems to have exacerbated the issue this time. I’m having pain just walking around at work, at home, at the grocery store… I’m having to wear my knee brace all day and when I tried going without it today I had less pain but it still hurt. And no, I haven’t been to the doctor.

The plot twist that occurred actually isn’t even the fact that I hurt myself. It’s what happened after I tried (and failed) to go for a run tonight. I thought maybe I could just take it easy and run/walk as far as my knee would allow. I figured even if I could only run 1 mile and walk after that, it would be ok, and better than nothing. But I didn’t even get one minute into running after walking for 5 minutes. My knee started getting that painful “give out” twinge so I stopped and just went home. And that’s when it happened….on the way home, I broke down. Yep, I cried. I wanted to run SOOOOO badly and I was so upset that I couldn’t run at all that I cried.

I know I keep telling you all how I’m surprised that I’m enjoying running, but tonight I saw just how much I want to have running be a part of my life. Running makes me feel good, helps me concentrate, and it makes me feel accomplished! I’ve still been using my exercise bike and doing strengthening exercises during the time that I haven’t been able to run, but I’ve noticed that it drives me crazy when I can’t run. I WANT TO RUN! Dang…I guess I’ll have to get to the doctor and/or hold off on running for another week. All I know is that I’m not giving up! And also, I want a good hamburger…I haven’t had one in a month. 🙂