After my return flight home was cancelled near the end of Princess Half Marathon weekend, I found myself having to stay at the Walt Disney Resort 2 extra days! If you missed the first part of my extended trip report, you can check it out by clicking
HERE for part 1

Monday February 23, 2015 (continued)
I walked into the lobby of All Star Sports and found it decorated with lots of balloons. A couple of people who had just finished checking in were carrying balloons away with them so I’m not sure if it was a special event or if the Cast Members were just handing out balloons randomly…but it was pretty festive looking!

I was helped almost right away and I got checked in quickly but the Cast Member that helped me went above and beyond by calling someone (in housekeeping, maybe?) and finding a room that was ready! That was such a big help and I was so glad that I could go ahead and get settled into my room! So once I received my room assignment, I headed out. I was in Building 4 which is in the Center Court area. Obviously it’s a tennis themed section. Here’s some of my views along the way! 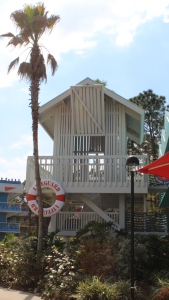 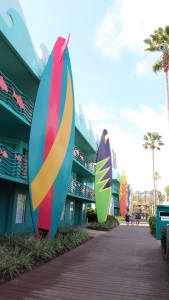 After the short walk to building 4, I found room number 4328 only to find that my MagicBand would not work to open the door. I double and triple checked the room number on my resort map that I received at the front desk and tried my band about 4 times just to make sure it wasn’t user error. But nope…my MagicBand had lost its magic….

This was the first time that I’ve ever had a problem getting into a room at Disney World. I’ve been lucky enough to not have had a faulty key card, Key to the World Card, or MagicBand up until this moment. So yes, I had to walk back to the lobby to get my MagicBand reprogrammed so that I could get into my room. But really, considering that all I had planned for the day was laundry and resting, I wasn’t too upset.

Once I got my MagicBand situation sorted out, I got into my room! Yay! All of the Disney Value Resort rooms pretty much look the same on the inside (except for slight differences in things like curtain patterns, carpet color, bedding patterns and such) but it had been several years since I’d stayed at Sports. It seemed like it had been remodeled since the last time I’d been there and of course the little mini fridge (or drink cooler…whatever you want to call it…it keeps perishable stuff plenty cold) was one of the newest things since those were added to all of the Values only a few years ago.

I took a few minutes to unpack my toiletries and I changed into my “I Did it!” race shirt because it was the only other clean shirt I had. I wanted to go wash my clothes so that I would have clean clothes for the next 2 mornings and just to have everything clean. I stretched my legs a little again before heading out to find the guest laundry facility.

I ended up going to the laundry room next to the main pool which is called the Surfboard Bay Pool. I got my clothes started in the washer and the posted sign informed me that the wash and dry cycles were 30 minutes each. Originally I planned to just sit and relax near the pool while my clothes were washing, but I’d already figured out that too much sitting down made my legs start getting stiff and sore all over again. So I decided to walk all around the resort while I waited for my clothes to be done. I don’t necessarily encourage anyone to leave their clothes unattended in the laundry room, there have definitely been times that people have had their clothing taken from the washers or dryers, but I didn’t feel too worried about my stuff getting stolen so I went exploring. 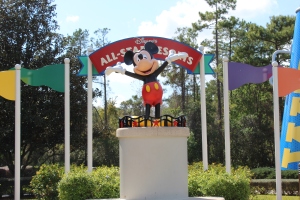 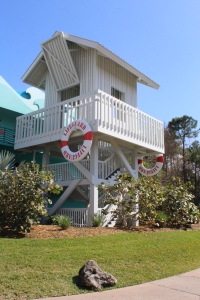 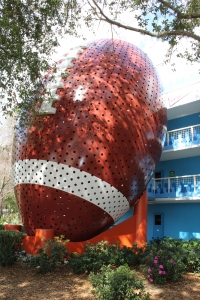 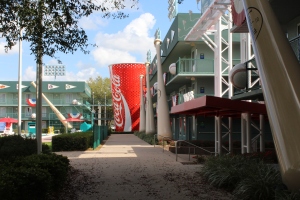 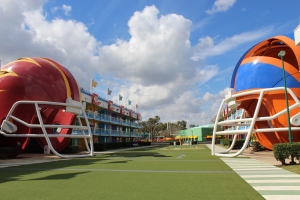 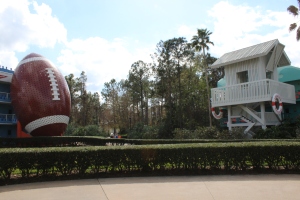 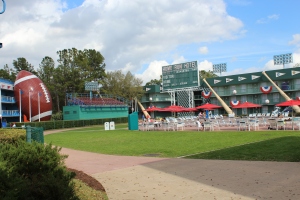 I went to each section of the All Star Sports Resort before I went back to check on my clothes. I still had a couple of minutes to wait once I got back to the laundry room before I could move my stuff over to the dryers. Since I’d already walked around all of the Sports resort and I had another 30 minutes to wait for my clothes to dry, I decided to head over to All Star Music which is right next to Sports.

It was very nostalgic to walk around the Music resort because I stayed here so many times with my family when I was younger. I didn’t get around to all of this resort but I saw enough to make me remember the fun trips and good times with my sister and our parents! 🙂 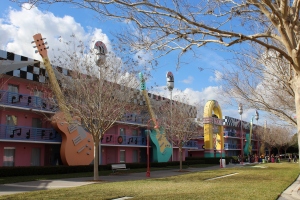 By now I needed to get back to the laundry room at Sports, so I made my way there. When I got back to check on my clothes, most everything was dry but a few things were still damp and I still had some time on the dryers. Once everything was done I got all of my clothes folded and neatly into the mesh bag that I’d received at the end of the half marathon the day before. I walked to Stadium Hall and made a stop at the End Zone food court to grab a few snacks before heading back to my room. I spent the rest of the day watching television, calling my kids and taking a much needed nap before grabbing some dinner.

It was a nice and relaxing day but I was excited that I was going to hit the parks one last time the next day. I already had plans to go to all four parks and since I’d be touring solo I knew it was gonna be easy to do!

😆 Yep. This used to be me. I learned it from my parents who planned our Disney World vacations to make sure we did everything we wanted to do each time. I'm (mostly) more chill now and I definitely rest in the parks these days. My knee and back make sure of that.